The  month of October has just flown by for us as Derwin and I spend our last high school season watching Jesse play golf.  The most exciting parts are her reaching so many of her goals as she progresses in a game she loves so much.  She shot a 36 this season and finished second in the conference.  I know she really wanted first but many of her goals were met even finishing second.  The biggest Dream come true was qualifying for States yesterday.  I can not even explain how relieved I am to have this day behind me.  I know she was so nervous and even upset by some of her play but the bottom line at the end of the day she made it!  Sadly her team missed going by 4 strokes.  In the game of golf you can pick 4 strokes to death.  Where one of our girls had a bad day another girl had the day of her life and Jesse knows how that can feel as well. The ups and downs of golf.  It seemed for a while that so much down would never bring the ups she wanted so badly but here we are today making reservations to play at Pinehurst, NC.  The best part it will just be Senior fun for her!  She Made It!!!

Above we are standing near the board where she learned she made the cut at Brushy Mtn. Golf Course in Taylorsville.

Below picture of her team although one will not travel with us next week, Jesse and Abby made the cut! 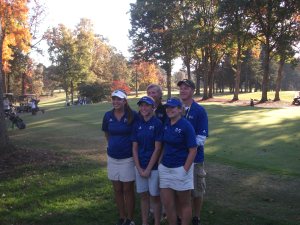 Here is a picture of some friends made along the way.  Golf is a great sport and it is so hard to pull against other girls sometimes.  Haley is from East Gaston and Elizabeth is from TC Roberson.  All Four girls are headed to States next week. 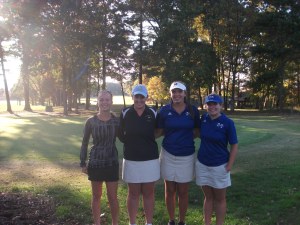 The final score card for Mooresville

Finally just this past Friday night at the Mooresville Football Game Senior Night was celebrated for not just football but all sports where seniors can not be recognized at a game.  We proudly escorted Jesse out after a great high school career in Women’s Golf

Hopefully soon we will know which team we will be pulling for next.

This site uses Akismet to reduce spam. Learn how your comment data is processed.